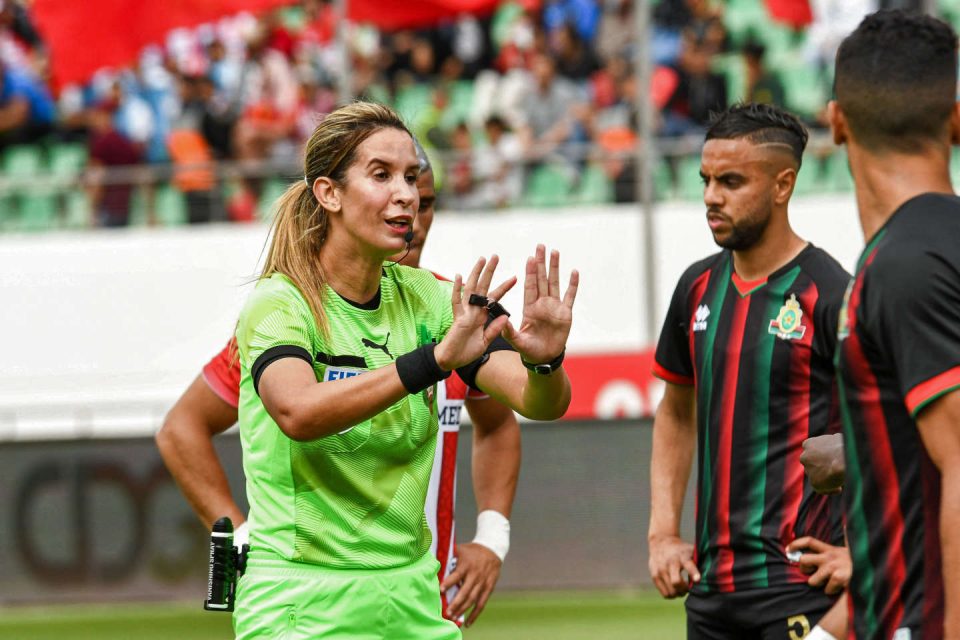 There are dreams that even the reddest cards can’t stop. Since childhood, Bouchra Karboubi wanted to be a football referee; and Bouchra Karboubi became a football referee. But not just any one: on May 14, on the field of the Agadir stadium, on the eve of her 35th birthday, she was the first woman from Morocco – and the first from the Arab world – to referee a final of men’s professional competition, that of the Throne Cup, which opposed the Sports Association of the Royal Armed Forces (AS FAR) to the Moghreb Atlético Tetouan (3-0).

At the end of the afternoon, the city of Meknes is suffocating under more than 40 ° C but Bouchra Karboubi is breathing. Five days after this historic meeting, she seems relieved. « It was necessary to show that I could succeed as a referee and as a woman”, she explains. Arriving at the Taeris Coffee, some recognize his huge figure and ask him the same question related to the final for the umpteenth time : “The red card, was it necessary? » Indeed, after the third minute – and after being called by the VAR (video assistance) – Bouchra Karboubi did not hesitate to expel an attacker for a violent game. “Having the courage to pull out a red card at the beginning of the game is not given to everyone, she launches. But we have to protect the players. »

Frank, bland, smiling and without pretense, Bouchra Karboubi tells her journey with overflowing joy. Football? It’s a meeting. She is 11 years old and a girlfriend offers her to come and play a game. She is not attracted to this sport, but when she gets on the field, it’s love at first sight. “Football took me that day, she recalled. The atmosphere, the team spirit, I liked everything. I even forgot about my worries. » Any worries at 11? “My brothers [elle en a trois et une sœur] were very hard on me. » They wanted, she explains, to play the role of the father, who was then working in France as a labourer and only returned to the country once or twice a year.

“I was hiding to play”

Bouchra Karboubi was born in Taza (north-east), not far from the Rif mountains. “The mentality there is complicated. In my time, girls didn’t have to go out: it was school and home. » The beginning of “injustice”, as she says. She does karate, but her brothers ask her to practice a discipline for girls. “I went to the most masculine sport: football, and also an attacker! », she laughs. Her choice is not without reprisals: one of her brothers hits her every time he learns that she continues to kick a ball. “I suffered. So I was hiding to play. It was my mother who was covering for me. At every game, at every training session, she would come with me on the pretext of an exit. Football is a revolt. »

You have 61.36% of this article left to read. The suite is reserved for subscribers.