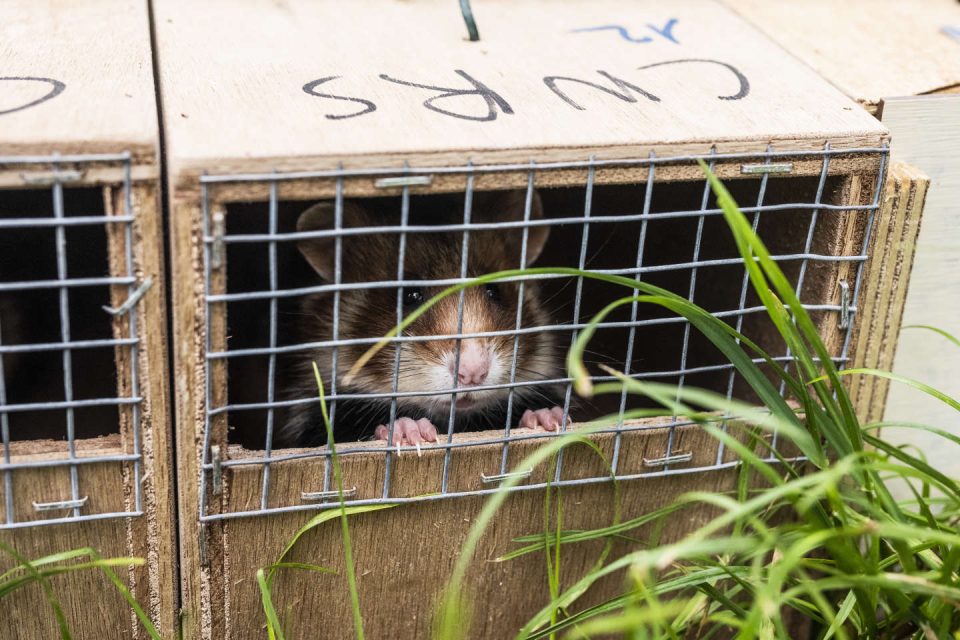 Reserved for our subscribers

ReportageThe wild rodent, classified as “critically endangered”, has been surviving for more than ten years thanks to the constant reintroduction of farmed animals. A long fight with an uncertain future.

On Friday, May 13th, a curious family was invited to the town of Geispolsheim, a few kilometers from Strasbourg. Under a finally gray sky, with their legs in the wheat wet by the first rains of the month, the touts move forward. Spaced a few meters apart, they tap with sticks on plastic cans. This choreography is all the more strange because their noise remains largely covered by that of the cars on the Strasbourg-Mulhouse motorway, which borders the plot. But human ears are in no way the goal of the operation. “This is the prerequisite for releasing hamsters, warned Marie Frolinger, conservation manager of the Hunawihr Naturoparc (Haut-Rhin), who is coordinating the troops on the ground this morning. We make sure that there are no foxes or other predators in the plot. Then we will proceed to the releases. Be careful not to crush the wheat too much, especially around the preterriers, otherwise rodents become too easy targets for raptors. And beware of bites, they are wild animals. Then we’ll put the electricity in the fences. »

Around her, everyone listens, even if almost everyone knows the music. Not the country guard, who took up his post the previous year, nor the road workers, who prepared the preterriers. But most of the others are on their third, fifth or even tenth operation. For the first of the four releases of the season, which will give a total of 500 rodents their freedom, everyone came: the various state services, the Chamber of agriculture, the owners of the plots, the scientists involved in the program, the employees of the various farms and even a German television, anxious to compare the methods of French repopulation of the threatened species with the methods applied across the Rhine.

Once the beating is complete, the essential operation begins. In groups of three or four, the troupe travels the length of the plot. Orange pegs indicate the location of the preterriers, dug to accommodate the animals, one vertical hole, another oblique, as the species is accustomed to do. “Enough to offer them a first shelter and accustom them to the outside, then they will go to make their hole elsewhere”, says Fabrice Capber, the veterinarian who oversees the farms.

From the “skewer” where they hang, a first cage is unhooked, turned over, and then the bottom is opened. With more or less goodwill, the rodents fall into the 80-centimeter hole, where a few kibble, a piece of apple and carrot are waiting for them. To the most recalcitrant, we give a push, or rather we blow on the muzzle. “I was bitten once, I ended up in the ER, I won’t get caught again”, assures Fabrice Capber. Two clods then come to plug the burrow, which the most daring will blow up after a few minutes, others after several hours of patience, or even more.

You have 81.62% of this article left to read. The suite is reserved for subscribers.