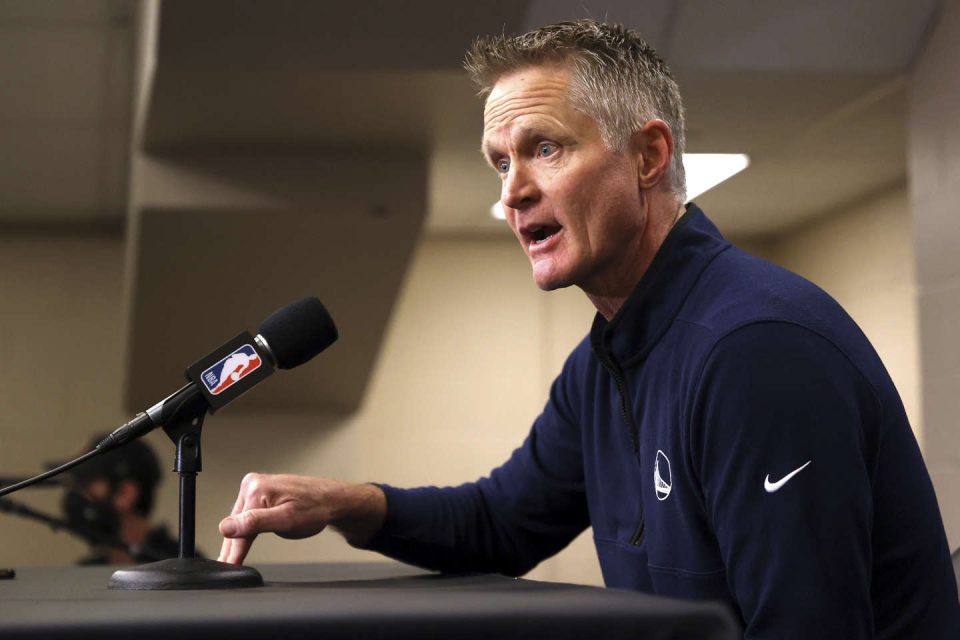 The tone is imploring and vindictive all at the same time. “When are we going to do something? » Misty eyes, clenched jaw and clenched throat, Steve Kerr repeatedly knocks his fist on the table. And warns : “I’m not going to talk about basketball. All basketball-related matters don’t matter tonight. » Steve Kerr is however a basketball coach and his team, the San Francisco Golden State Warriors, one of the flagship franchises of the NBA, the North American league, was preparing, Tuesday, May 24, to face the Dallas Mavericks in the fourth game of the conference finals in the Texas city. But the news of the day forced the technician to move away from the field.

The marked features, the American coach confessed his ” fatigue of [se] present in front of [la presse] to present [ses] condolences to the devastated families”. Before lashing out at U.S. senators refusing to legislate despite litany of shootings : “90% of Americans, regardless of their political orientation, want [une régulation des armes]. We are being held hostage by fifty senators in Washington who refuse to put this measure to a vote. »

Read our editorial : Texas shooting: US kills each other, Republican Party looks elsewhere

Running in a loop on TV channels and social networks, this vibrant plea for gun regulation resonates in the United States, once again bruised by a school shooting. Because Steve Kerr has the voice that carries. At the age of 56, the man who won three NBA titles as a player with Michael Jordan’s Chicago Bulls and two with the San Antonio Spurs, as well as three titles as coach of the Warriors, is accustomed to speaking on social topics.

His father died in an attack in Lebanon

He is all the more sensitive to the issue of shootings, as his father, president of the American University of Beirut, was assassinated by Islamist terrorists in Lebanon in 1984. Appointed in December 2021 as coach of Team USA, the American men’s basketball team, Steve Kerr succeeded Gregg Popovich, the coach of the Spurs (and Frenchman Tony Parker throughout his career). The Californian coach, player, then assistant to Gregg Popovich, not only put his steps in those of his Texan mentor on the parquet floors, he also, off the court, followed the example of the latter never the last to engage in social topics.

« [Popovich] uses his position to make his voice heard about injustices, racism, police violence and the rest of the evils plaguing American society, greeted in March the former NBA player Ethan Thomas in an op-ed at the Guardian. As a white man, especially in Texas, it requires a lot of courage, and commands respect. »

Read also : Article reserved for our subscribers US reeling from new shooting: at least 19 children killed at Texas school

Steve Kerr, who did not hesitate to criticize the positions of Donald Trump, then President of the United States, trained with Gregg Popovich and other NBA coaches a “committee on racial injustice and reform” in 2020, in order to collectively reflect on social issues, and consider solutions.

“He will always fight for what is right”

“Every American, regardless of party, should be sickened by what is happening in the country right now”, insisted the Warriors coach in 2016, after the death of a black man, killed by police as he returned to his vehicle with his arms in the air. At the time, the country was split between pro and anti-Colin Kaepernick, after the American football player of the San Francisco 49ers had knelt during the anthem before a game, to protest police violence (he never found a club).

Read also The Kaepernick Revolution, or how Black Lives Matter made school in American stadiums

Since 2016, the basketball world in the United States has been a favorable breeding ground for these questions. While the NFL struggled to take stock of the situation, the NBA became resolutely committed to the defense of minorities in the wake of the Black Lives Matter movement (“black lives Matter”), following several of its star players (such as LeBron James or Stephen Curry) and coaches, such as Steve Kerr.

To whom his player Damion Lee was paying tribute, in 2021 : “He supports us in all areas when we try to highlight injustices and social problems, greeted the Warriors fullback. His past, and what he’s been through, make these issues close to his heart. He will always be at the forefront and he will always fight for what is right. »

In January 2021, following the assault on the Capitol by a crowd of pro-Trump convinced that the election had been stolen from them, Steve Kerr had already chosen to stop talking about basketball. “I started the day thinking about how to defend on Lou Williams [un joueur adverse], and suddenly it didn’t seem so important to me anymore when I turned on the TV and saw what was happening”, related the coach in a press conference. “It was a bizarre scene, but I saw in it a clear reminder of the importance of truth. The truth is paramount in our country and all over the world, and if we allow lies to spread, it has consequences. »

Read also : Article reserved for our subscribers A year after the assault on the Capitol, a look back at the day American democracy faltered

A committed citizen beyond his influence on the game, Steve Kerr once again spoke out on Tuesday, following a new drama related to the unregulated circulation of firearms in his country. No doubt he hopes his truth will help move the lines.

Léolia Jeanjean continues on her way without trembling