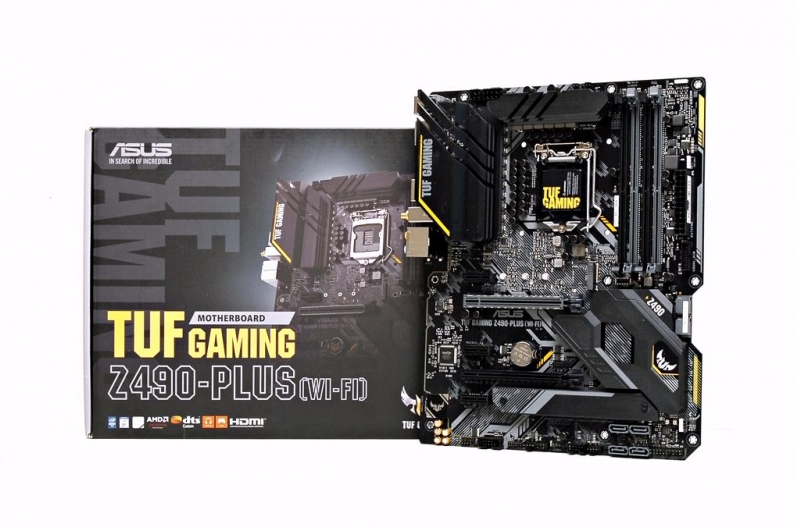 Finally, Intel’s 10th-gen processors appeared on the market. Although the consumer’s eyes are somewhat awkward due to the use of a 14nm process that is not much different from the previous generation, the multi-core integrated in one die, optimized cache, wide application of hyper-threading, and significantly higher operating speed are’performance It is also true that we have made improvements that are said to be in sharp contrast with the existing ones.

Whenever Intel releases a new generation of processors, it often comes up with a new set of chipsets and sockets, but it’s a burden for consumers to choose a new processor and have to replace the motherboard. On the other hand, the new motherboard, which provides the highest compatibility with the latest processors, also includes a positive aspect that it can actively utilize various modern interfaces.

Anyway, Intel’s 10th-gen Core processor, which was expected to have no major repercussions, seems to have succeeded in achieving unprecedented performance gains with wide support for hyper-threading and tremendous motion clock. For this reason, the market response to the Intel 10th generation core processor is unexpectedly high, but if you choose a performance-oriented Intel Core-i7/i9 class processor, you will have no choice but to take a look at the party Z490 series.

Recently, there are many opinions that the quality of major motherboard manufacturers is similar, but ASUS is a brand that enjoys a special position. It is a brand that has already been called as a pronoun for the motherboard for more than a few decades, but it still shows the highest level of completeness for users who directly deal with complex structures and more complex BIOSs.

ASUS motherboards are divided into top brands ROG, TUF GAMING, and PRIM series, of which the TUF GAMING series provides a relatively high-grade motherboard at a more realistic price, which requires consideration of both function, performance, and price. It is a lineup that is highly supported by consumers.

Among them, the TUF GAMING Z490-PLUS (WI-FI) is one of the examples that fit the above description.Intel’s top Z490 chipset and ample power supply to handle the power limitations of high-power/high-clock Intel processors, the latest interface And WI-FI, it is a product that enables the use of PC in all imaginable ways.

The powerful power supply consisting of a total of 14 phases (12+2) is warm enough to see. However, if you have different thoughts on why you should have a power supply that is as big as that, it is also a bit bitter. A huge heat sink is also noticeable to eliminate heat generation in the power supply. ASUS uses a Dr. Hi/Low MOSFET and a driver that combines drivers to improve the quality of the power supply. MOS is being used in the power supply unit, which has the advantage of fast and stable power supply, reduction of power error and heat generation. In addition to this, ASUS-specific DIGI VRM provides the highest quality power to the processor, and is also very flexible in overclocking.

The choke used is a military class product, and the capacitor is also designed separately for the motherboard of ASUS, and has a high allowable temperature of 20% or more and a service life of 5 times longer. It may be a time-consuming part of verification, but as ASUS explains, even if the processor is overclocked, it is unlikely that the power supply of the motherboard will be damaged before the user changes the system.

Depending on the user’s convenience, two M.2 slots located at the bottom of the CPU socket or at the bottom of the motherboard can be used. Supporting two or more M.2s, which are mainly used as high-speed storage interfaces, features a SATA port and a seamless storage configuration. In particular, the bottom M.2 slot also provides a heatsink equipped with a separate thermal pad, which is even more important when using an M.2 SSD with a high transfer rate of 3GB or more per second.

Recently, a high-performance graphic card has a great weight, but sometimes a sagging phenomenon occurs due to the weight of the graphic card, and a problem occurs in the system due to poor contact. PCIe slots will not solve all of these problems, but PCIe x16 slots with metal moldings to withstand higher loads are a good attempt.

Improvements in the memory area are also worth looking at. The processor’s memory support has increased to DDR4-2993, but ASUS TUF GMAING Z490-PLUS (WI-FI) can overclock up to 4,600 MHz using memory-supported XMP and motherboard-supported memory overclocking features. . Support is provided to the level that exceeds the operating speed of the highest-end overclocked memory on the market, so you can take full advantage of any memory.

ASUS has a special design in memory slots to support this memory. The technology, named OPTIMEM II, has structurally separated the rest of the main board from the rest of the memory so that the memory runs smoothly. Through this, it is understood that the phenomenon that the surrounding signal causes interference with the memory is basically blocked and the stable power supply to the memory is achieved.

Shielding or partitioning in the mainboard that we looked at in memory is actually the first technology to be applied to the audio part. Due to the nature of the audio, it is easy to cause serious problems even with slight noise, and in order to provide high quality audio, it is necessary to suppress such electrical interference.

ASUS shields the Realtek S1200A codec with a shield to provide higher quality audio. This minimizes the influence of external radio waves on the codec, and also minimizes electrical interference through an independent circuit completely separated from other parts of the main board. In addition, a separate Japanese-made high-end capacitor was used for audio.

Even if only the applied techniques are enumerated, they are tiring after reading. For the protection of the system, such as a technology that suppresses overvoltage from the keyboard or mouse, a separate ESD TV diode for VGA protection, and a TVS diode that protects the system from short circuits that may occur when connecting to external devices such as USB ports. Many necessary overvoltage/overcurrent protection circuits were employed. In addition, TUF LANGuard can protect LAN ports up to 15KV even when instantaneous high overvoltage occurs, such as lightning or static electricity.

The support of WI-FI is also prominent. It is expected that the active use of WI-FI in addition to Bluetooth will greatly improve the efficiency of work through convenient use of the Internet without a cable connection and active data sharing with other devices within a certain range.

USB 3.2 GEN2 (Type A/C) port, Thunderbolt 3, SATA port configured differently in 2+4 format for convenient use depending on the case in use, two 12V ARGB headers/5V Gen supporting ASUS AURA Sync 2 It supports more than the user expects, such as ARGB header. With this kind of support, there is nothing short of building any system.

Even with the fan control, it looks very carefully prepared. A total of 5 fan headers are provided, including a separate header for the water pump, and all parts can be thoroughly controlled through the BIOS. Of course, the above-mentioned protection function is applied to the fan header as well, and it is equipped with a function to protect each fan header from overheating or overcurrent. It is no exaggeration to say that the

complete BIOS is the strength of the ASUS

motherboard, and if the hardware configuration is half, the other half is the power of the BIOS. Since all of the advanced management and control of various functions are done through the BIOS, as much as creating a stable and sturdy motherboard, the provision of the functions required by the user and the BIOS making it possible to effectively control it are important elements. .

Some motherboards don’t provide the level of BIOS that users expect compared to good quality hardware, so some consumers buy it, while others don’t fix bugs in the BIOS even after a long time. . Here is an example of a poor BIOS that couldn’t match the level of Korean consumers.

It is true that ASUS motherboards have the lowest chance of experiencing any problems even at the initial launch. It is also because it is a product of a company that has been manufacturing motherboards for a long time, but it is a brand that has not neglected to develop new functions and more convenient BIOS in a leading position for a long time. In addition, the fastest patches are being made for minor bugs.

Within a few days, two BIOS updates were made. In the initial version, we didn’t find any problems, but it is also positive that we improve the BIOS intensively at the initial stage of product release to improve stability and performance. It is divided into EZ Mode, which can be completed easily and easily, and Advanced Mode, for experts. Even in easy mode, you can check very detailed information such as the operation speed of the processor and memory, and the operation speed of the water pump.

It is also possible to increase the performance of the processor by using the automatic overclock function, or to increase the memory operation speed by using the XMP function. If you want to control every detail of the system, you can use Advanced Mode. In addition to adjusting the voltage and operating speed supplied to the processor and memory, the Intel processor’s power limit can be lifted to an unlimited level.

You can adjust the operation speed of various fans to suit your intentions, and you can utilize more than hundreds of items for power, performance, and overclocking. Is ASUS completeness like this? It is not easy to find a small bug even though it provides tremendous functions like that. A function and completeness that can reflect all the intentions of the user surely increase the user’s satisfaction.

The RGB Sync function is accepted as the industry standard. Moreover, TUF GAMING Z490-PLUS (WI-FI) supports both 1st and 2nd generation Aura Sync, so it is also advantageous to integrate the devices that support it regardless of the version to control the lighting effect.

How to fall from a tree with a mainboard monkey that is ready for mania . Even if you always do the work, everyone makes mistakes at one point. It’s not too tiring to see these minor mistakes expand into irreversible problems. Even if you can get the service, the cost and time for this are all up to you.

ASUS TUF GAMING Z490-PLUS (WI-FI) is an Intel 10th generation processor-capable motherboard that can be purchased at a reasonable price-but still quite expensive-and actively supports a variety of modern interfaces and changing system environments, Stable overclocking and memory support through a powerful power supply stand out. However, what I like more about this is that I have taken protective measures for all areas where problems may occur.

In the process of assembling and using the system, if it is possible to inadvertently make an unintentional mistake in the process of overclocking, the technology to effectively prevent this from leading to damage to the system will definitely help the durability and reliability of the system. It is a line element. Being able to access and control all the parts that the user wants, like ASUS, is also a privilege and fun for users using high-end motherboards, especially ASUS motherboards. Even minor bugs are more robust with a BIOS that’s high enough to be hard to find.

ASUS TUF GAMING Z490-PLUS (WI0FI) is a versatile choice if you’re thinking of a high-end gaming PC or a PC to be used in various specialized areas for work with a wide range of hyper-threading support and improved performance based on increased operating speed. It is expected to be a great advantage in the field.