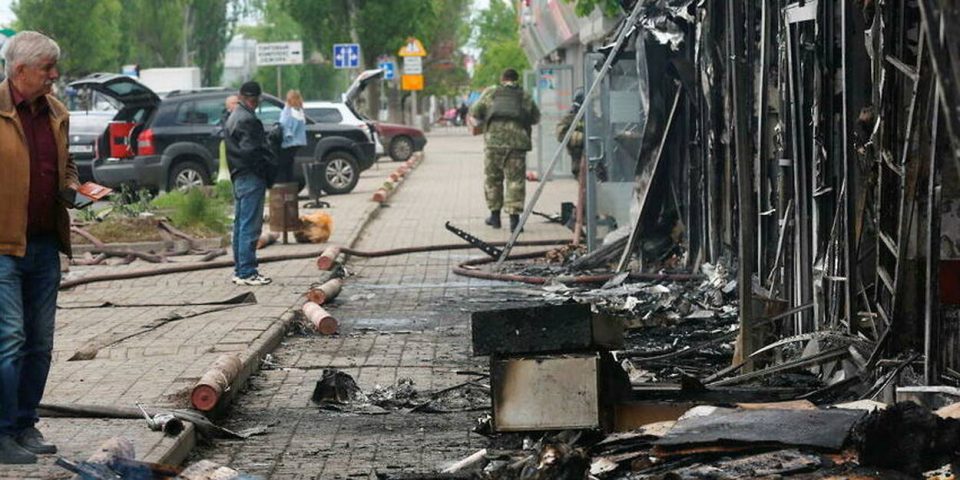 Si Ukrainian forces have managed to repel the Russian military from Kiev and Kharkiv, the two largest cities in the country, but they are failing to do the same in the Donbass, where resistance is being undermined after new Russian assaults in recent days. According to Ukrainian President Volodymyr Zelensky, the Russian military has intensified its offensive in this region and is determined to “destroy everything” there.

“In the Luhansk region, the Russians are advancing in all directions at once,” regional governor Sergei Gaidai said on Telegram on Wednesday. “The situation in Donbass is extremely difficult,” President Zelensky acknowledged on Tuesday evening. “All the forces that the Russian army still has have been thrown there for the offensive,” because they “want to destroy everything,” he claimed.

TO READ ALSO“The Russian strategy has changed in the Donbass”

Moscow has decided to intensify its offensive in the Donbass, formed from the Luhansk and Donetsk regions, which the Ukrainians are struggling to defend, after pulling Russian forces away from the country’s two largest cities, Kiev and Kharkiv (Northeast). It is in particular to defend the Donbass, partially controlled since 2014 by pro-Russian separatists, from an alleged “genocide”, that Russian President Vladimir Putin triggered the invasion of Ukraine on February 24. “We will continue the special military operation until all the objectives are achieved,” Russian Defense Minister Sergei Shoigu insisted on Tuesday. He also stressed that Moscow is preparing to conduct a long offensive in Ukraine.

According to the Ukrainian General Staff of the armed Forces, Moscow is using its aviation more to support its ground troops. “Due to a lack of high-precision missiles, the enemy is seeking to destroy critical and military infrastructure in Ukraine by other means,” he said.

In the Donbass, the governor-general reported “increasingly intense shelling” and claimed that “the Russian army aims to completely destroy Severodonetsk,” a strategic city northwest of Luhansk. “We are an outpost that is holding back the assault and will do so. Despite the superiority of the enemy army, WE will win, because we are fighting for our land,” Sergei Gaidai said, comparing the situation in the Luhansk region with the situation in the Mariupol province.

This large port city in the south-east was practically razed to the ground after several weeks of siege and shelling. The Russians are encircling Severodonetsk and Lysychansk, two localities separated by a river and which constitute the last pocket of Ukrainian resistance.

Fighting is also underway for control of the city of Lyman, an important railway junction, the capture of which would be an important step forward in these encirclement attempts, said the leader of the pro-Russian separatists in Donetsk, Denis Pushilin. “Russian units and the people’s militia (the pro-Russian separatist army) have entered the city,” he said during a pro-Kremlin broadcast on YouTube, the information being impossible to verify immediately.

TO READ ALSOIn the Donbass, the war of the Churches

The Ukrainian Defense Ministry also mentioned intense fighting in the vicinity of the settlements of Popasna and Bakhmut, the fall of which would give the Russians control of an important crossroads for the Ukrainian war effort. In this context, Kiev urged the West to deliver more armaments to it.

“The Russian offensive in the Donbass is a ruthless battle, the largest on European soil since the Second World War. I urge our partners to accelerate the delivery of weapons and ammunition,” Ukrainian Foreign Minister Dmytro Kuleba said on Tuesday. President Zelensky himself demanded “heavy weapons: rocket-propelled grenades, tanks, anti-ship weapons and other weapons”. The situation on the southern front remains stable, although the Ukrainians claim territorial gains there.

By the way, in Kharkiv (North-East), life began to return to normal, the metro, which served as a shelter from bombs, had been running again since Tuesday. Stepping up their pressure on Russia, the United States has decided to end, as of Wednesday 4:1 GMT, an exemption allowing Moscow to pay its debts in dollars, the US Treasury announced on Tuesday. The move could push Russia, which has a dozen payments to meet by the end of the year, into default.

At the Davos Forum, Swiss President Ignazio Cassis announced that his country would organize a “Ukraine reconstruction conference” on July 4 and 5, which should address, in particular, the issue of announced and upcoming contributions from the World Bank, the OECD and the European Union (EU).

For his part, the American billionaire George Soros wanted to be an alarmist on the sidelines of the meeting of the World Economic Forum. “The invasion (of Ukraine by Russia) may have been the beginning of the third World War, and our civilization may not survive it,” he said in a speech. For him, “the best and only way to preserve our civilization is to beat (Russian President Vladimir) Putin as soon as possible,” he insisted.

TO READ ALSOWar in Ukraine: in Kostiantynivka, with the damned from Donbass

The EU was still discussing an embargo on Russian oil on Tuesday, which requires the unanimity of member countries. Germany and France considered it possible to achieve this in the coming days, but Hungarian Prime Minister Viktor Orban, whose country is very dependent on Russian oil, considered this prospect “very unlikely” in the immediate future.

In three months of armed conflict, 234 children have been killed and 433 injured, the office of the Prosecutor General of Ukraine Iryna Venediktova denounced on Tuesday. In total, thousands of civilians and military personnel have died, without there being a quantified death toll. For the city of Mariupol alone, the Ukrainian authorities are talking about 20,000 dead. More than eight million Ukrainians have been internally displaced, according to the UN. In addition, 6.5 million have fled abroad, more than half of them – 3.4 million – to Poland.

Covid-19 : Israel wants to vaccinate two million people by the end of January